FASCINATING FACTS BEHIND THE TINY CAT PARASITE THAT CAUSES TOXOPLASMOSIS. CAN THIS SMALL ORGANISM TURN YOU INTO A “CRAZY CAT LADY”? 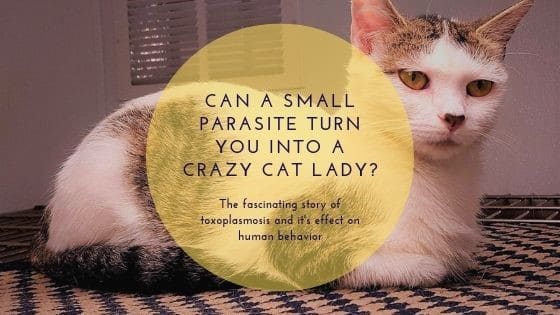 Crazy cat ladies.  We’ve all heard the term, but what does it mean?  According to the Urban Dictionary, a crazy cat lady is “A woman who loves her cats more than people”.  There are other, more pejorative definitions, but I prefer this one which signifies a deep affection for felines.

But, is it possible that a parasite common to cats can cause changes to behavior when a human is infected?  Surprisingly, current research shows that it can.

Toxoplasmosis is a parasite which affects cats.  These little critters are ingested when a cat eats an infected rodent, excreted by cats in their feces, and often infects humans as well.  It’s the reason pregnant women are told not to clean their cat’s litter boxes, for fear of infecting their unborn child.  In healthy adult humans, however, infection with the toxoplasma gondii parasite may briefly cause mild, flu-like symptoms, but often produces no symptoms at all.  At least, not physical ones.

CAN I AVOID GETTING INFECTED?

If you’re concerned that your cat may be infected, your veterinarian can perform a simple blood test.  Even if she does have the parasite, it is a simple matter to avoid infection. As with most things, careful sanitation can prevent you from getting infected, even if you have multiple cats.  Use gloves when changing the litter box. Make sure and wash your hands after dealing with cat waste.  Merely petting a cat is unlikely to infect you. Contact with feces, working in soil that has been contaminated with cat waste, or drinking tainted water are the primary routes of transmission.

Below are a couple extra steps to prevent infection:

HOW MANY HUMANS ARE INFECTED?

Estimates are that between 30% and 60% of the human population worldwide are infected with the parasite.  Because it often doesn’t cause symptoms in healthy adults, estimates are merely educated guesses.  And not particularly accurate guesses given the wide range.  Still, recent studies in France suggest that up to 60% of the French have contracted the parasite.

Rats and mice infected with the toxoplasma gondii parasite show odd behavioral changes.  Most fascinating of all, these changes greatly benefit the cat!  Some of these include: 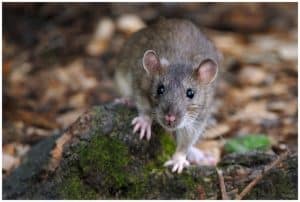 These don’t scream crazy cat lady to me.  But it does show an increasing tolerance for cats, even among their prey.

CHANGES IN HUMAN BEHAVIOR DUE TO TOXOPLASMOSIS

If these effects are the same in humans, you can see how infection might result in a person being more attracted to cats.  But there are other, odder, behavioral changes as well.

According to studies conducted in Czechoslovakia infected men are more likely to ignore rules and conventions. They also tend to be more suspicious and jealous than non-infected men.  Women with toxoplasmosis, on the other hand, became more outgoing and conscientious.

There are also some limited studies which show a greater susceptibility to schizophrenia in infected people as opposed to those who show no sign of the parasite. 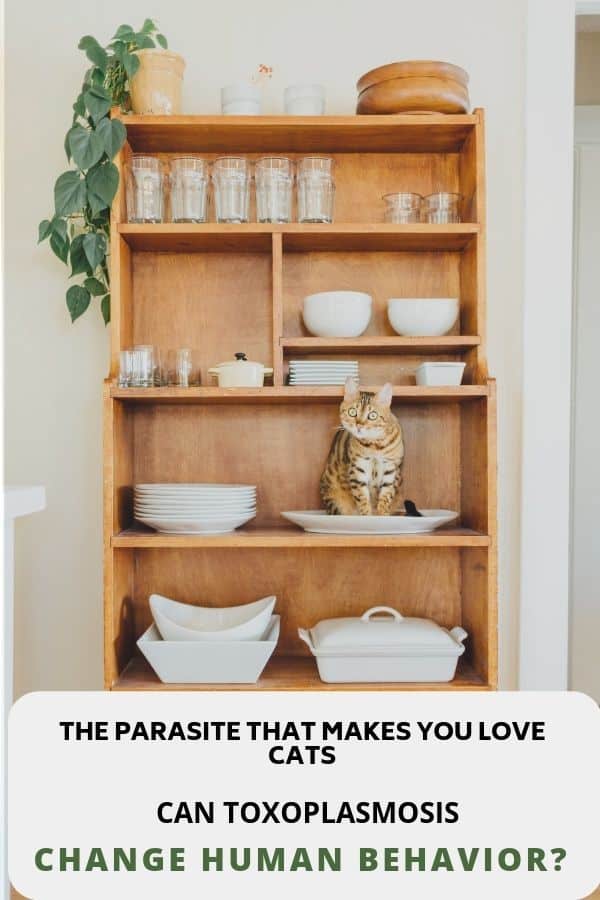 Further studies conducted in universities in the Czech Republic showed a definite correlation between infection and traffic accidents.  Likely owing to the decrease in reaction times mentioned above, those who had the parasite have 2.65 times greater risk of being involved in an accident than non-infected people.

Another odd fact. People infected by the parasite were 1.4 times more likely to major in business in college. They were also more likely to start their own businesses upon graduation.  This is logical if you consider the lower levels of fear.  Most of us don’t take the leap into business because of fear of failure.  If that fear is lessened, we’ll take more chances.

WHAT IF I HAVE TOXOPLASMOSIS?

If you’re an adult, otherwise healthy, and not feeling any ill effects, treatment is generally not recommended.  However, if the research above, still in its early stages, continues to show perpetual behavior changes, the medical thinking on this may change. There are antibiotics which can kill the parasite.  At this time these are used only on immuno-compromised people, children, or pregnant women.The parasite is not optimized for a human host and will not breed inside you. Although they may remain in your body for decades, they will be dormant and you will not pass any along to anyone else.

SO, IS A PARASITIC INFECTION WHY “CRAZY CAT LADIES” LOVE THEIR CATS?

Probably not.  Although rodents’ fear of cats is lessened, and their instinctual reaction to the smell of cat urine is modified, there is no evidence that they actually LOVE cats.  And the same can be said of humans.

I use the term “crazy cat lady” in a humorous way. Some of my favorite people are all about cats, and work tirelessly to protect, heal, and find forever homes for them.  And, although I’m definitely a dog person, I have to admit that there is nothing cuter than a teeny kitten racing around the room with her litter mates.

Cat behind green leaf photo by Леша esvan on Unsplash

Photo of cat on cupboard by Paul Hanaoka on Unsplash

Picture of woman petting cat by Oleg Ivanov on Unsplash

Photo of rat in foliage by Steve_Herring on Foter.com / CC BY-ND 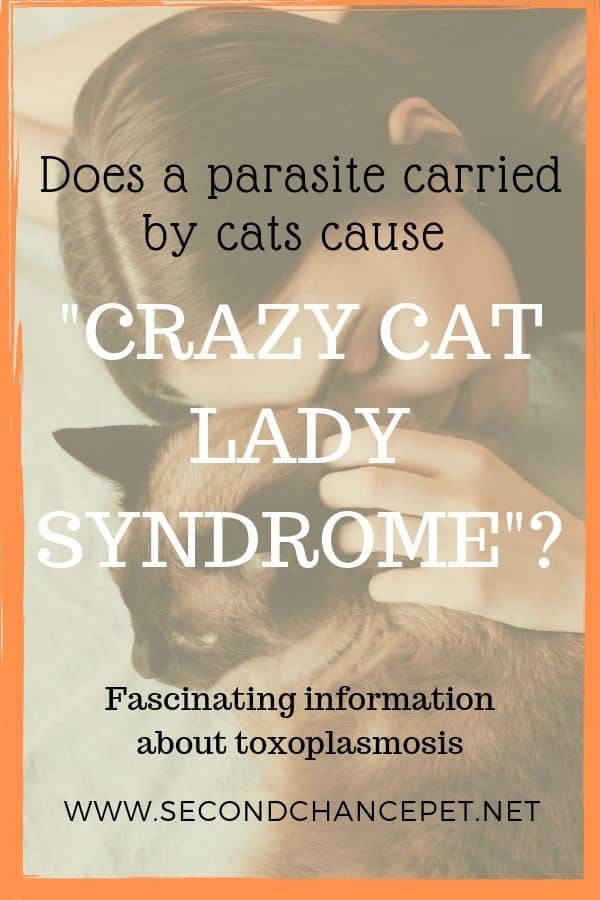 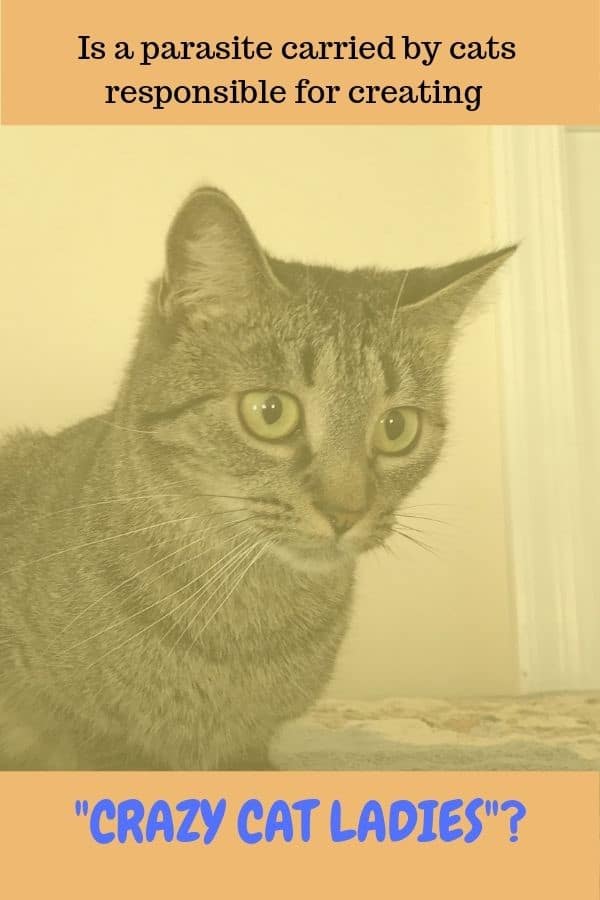