It wasn’t only humans who served the military in wartime – there were also a few outstanding animal heroes.  Here are three: 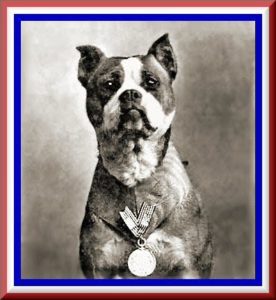 Sergeant Stubby (1916 – March 16, 1926) was the official mascot of the 102nd Infantry Regiment (United States) during World War I. He served for 18 months and participated in seventeen battles on the Western Front. He was either an American Pit Bull Terrier, or a mix.  As befits this page, he was a stray, discovered at Yale University by troops who were training to go into combat.

One of the soldiers, Corporal Robert Conroy, hid him on the troop ship when the regiment shipped out.  He then hid him in his overcoat to avoid detection.  When he was discovered, he ingratiated himself by saluting the commanding officer.  The office, of course, let him stay.

Stubby served with the 102nd Infantry Regiment in France for 8 months and participated in 17 battles. He was wounded in the leg by a hand grenade. When he recovered from his wounds, Stubby returned to the trenches.

In his first year of battle Stubby was injured by mustard gas. After he recovered, he returned with a specially designed gas mask to protect him. He learned to warn his unit of poison gas attacks, and locate wounded soldiers. Like all of you would do, at the end of the war, Robert Conroy smuggled Stubby home.  He remained with Corporal Conroy until his death in 1926.  Stubby received a lengthy obituary in the New York Times.  For more information about Stubby, visit:  http://www.badassoftheweek.com/sgtstubby.html 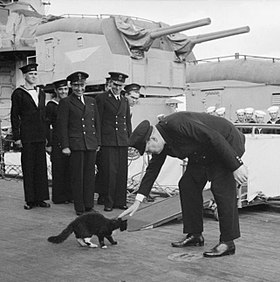 Simon served on the British ship HMS Amethyst during the Chinese Civil War. Again, as befits this page, Simon was found as a stray by 17 year old Ordinary Seaman George Hickinbottom in Hong Kong, and smuggled aboard the Amethyst where he quickly bonded with the ship’s captain. He immediately set to work on killing the rats which had been plaguing the ship. He would often leave these rats in the sailor’s beds – a fine present, or so he thought.

Simon was badly wounded when the Amethyst was bombarded by Chinese troops. After receiving medical treatment for his wounds, he made a full recovery. Eventually, he killed a giant rat nicknamed “Mao Tse Tung,” earning him a promotion to the rank of Able Seaman. For defending the crews’ food supply which allowed the crew to survive a three months siege, Simon became the first and only cat to receive the Dickin Medal. He passed away in November of 1949. Time magazine published a post-mortem tribute to this war hero.  For more information on Simon, visit the following page: https://priceonomics.com/the-most-decorated-cat-in-military-history/ 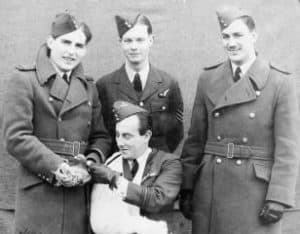 On February 23, 1942 an RAF crew was returning from a mission over Norway. Their plane had been hit by enemy fire and crashed into the sea more than 100 miles from home. Struggling in freezing waters – unable to radio an accurate position back to base – the four men faced certain death. But as the aircraft went down, the crew had managed to save their secret weapon – a carrier pigeon. The bird, called Winkie, was set free in the hope it could fly home to its loft and alert the air base as to their location.

During World War II, carrier pigeons were routinely carried by RAF bombers for this very eventuality, though in an era before GPS and satellite locator beacons, rescue was far from certain.  But Winkie did make it home, after flying 120 miles, and was discovered, exhausted and covered in oil by owner George Ross. He immediately informed the Royal Air Force command.

The pigeon was not carrying a message, but the RAF was able to calculate the position of the downed aircraft using the time difference between the plane’s ditching and the arrival of the bird – taking into account the wind direction and even the impact of the oil on Winkie’s feathers to her flight speed.  A rescue mission was launched and the men were quickly found.

She, too, won the Dickin Medal for bravery of animals in combat.  For more information on Winkie, please visit the following page – https://honeybeesandhelium.wordpress.com/2012/11/09/winkie-the-pigeon/

We owe all of our veterans, both two-legged and four-legged, both earth-bound and feathered, a debt of thanks which can never be fully repaid.