DOGS SHOULDN’T LIVE ON A CHAIN!  AND NOW THEY DON’T HAVE TO.  AN OREGON-BASED CHARITY – FENCES FOR FIDO – HAS GIVEN OVER 2200 DOGS THE CHANCE TO LIVE A CHAIN-FREE LIFE

Chained dogs.  We all know that dogs shouldn’t live on a chain.  Ideally, they should live in the home with us.  Still, for some people, an outside dog is the norm – it’s a mindset they grew up with.  Try as we might to change opinions in that regard, it is often a hopeless task.  So, one group decided not to try.  Instead, without judgement, they offered an alternative to the chain.

Fences for Fido, an Oregon-based charity is making a real difference here.  Fences for Fido has a virtual army of volunteers who spend days building fences around people’s yards, so that their dogs can finally experience a life that doesn’t stop at the end of a 20-foot chain.

A DAY IN THE LIFE OF A CHAINED DOG

Imagine you’re a dog tied to a 20-foot chain.  That small circumference defines your life.  Once or, if you’re lucky, twice a day your owner comes out with food.  He may, or may not, spend a few minutes with you.  Other than that, you’re alone.  You can’t get to the grass beyond your pen.  But it sure smells good.

Your dog house, if you have one, has holes in the roof and the floor.  Still, there’s a small area you can curl up in to get away from the blazing sun or the pouring rain.  But if it rains too long, your coat and your bedding get soggy and smelly.  It may take days of dry weather to make things comfortable again – and that many days may not come in a row for a long time.

It’s bad when another dog, or a wild animal walks by.  You bark and bark, but, once the other animal knows you can’t run, you’re an easy target.  You hope that you never have to face an aggressive dog or a hungry predator, because you know you’re easy prey.

But the worst is the loneliness.  You don’t feel good, so, even when your Owner comes out to spend some time with you, you can be grumpy and even growl.  But you still look forward to the company, and you’d love nothing better than to be able to run and play beyond the 20-foot reach of your chain.

Then, one day, you see two strangers knock on your owner’s door.  You bark and bark, to warn him, but he lets them in anyway.  After a while they leave, and your life goes back to normal.  But….not for long.  Those people were from Fences for Fido, and your life is about to change for the better.

HOW IT CAME TO BE

Fences for Fido was founded in 2009 by ten friends who often lamented the plight of dogs who lived their lives at the end of a chain.  And then came Chopper.  Chopper was a mixed breed dog whose owner did not have a fence and he lived too close to a busy road to safely let Chopper loose.  He had a shelter, that’s true, and food and water as well.  But he never got to experience life as a dog should.

So, two of the ten friends steeled themselves up to knock on a door, and offer a free fence to Keith, Chopper’s owner.  Keith says now that he doubted they could do it, but he was willing to let them try.  With a crew of volunteers, over just a few days, a fence was built.  As with all future fence-builds, Fences with Fido also provided a warm and dry dog house.  Chopper faced the moment when he was finally free of the chain – and he blossomed.  Although Chopper has since crossed the Rainbow Bridge, Keith still loudly sings the praises of Fences for Fido for allowing his dog to have a normal life.  For more information about Chopper, please see the YouTube video below.

AFTER THE FIRST SUCCESS

From the beginning, Fences for Fido ran with three main themes:

HOW DO THEY FIND CHAINED DOGS?

Dog owners can apply for a fence directly on the website.  Also, if anyone sees a chained dog and would like Fences for Fido to approach the owners, all they need to give the organization is an address.  FFF will take it from there.  Law enforcement, shelters, and animal control also provide leads and contact information.

As with any other animal organization, volunteers are Fences for Fido’s lifeblood.  At any given time, they have hundreds of active volunteers – some who are construction professionals.  Because of these high numbers, they are able to have several builds going on during any given weekend.  Fences are built regardless of bad weather or rough terrain – this truly is a labor of love.  Each project has between six and 10 volunteers – and the very best moment of any build is when a dog is finally allowed off the chain and shows his appreciation by greeting each volunteer in turn.

WHAT CHAINING DOES TO A DOG’S PERSONALITY

Dogs are social animals.  Isolating a dog to the limit of a chain’s reach can cause fear, emotional shutdown, or aggression.  Chained dogs can be attacked by other animals, and can easily become trapped by a tangled tether resulting in injury or dehydration.  Add to this the lack of physical exercise, and mental stimulation, and you have a dog which suffers from tragically stunted development.

Statistics show that a dog who has spent considerable time on a chain is approximately eight times more likely to bite than a non-chained dog.  It is nearly impossible for a dog to bond closely with an owner, or any human, when their natural pack instinct is denied.

Fences for Fido doesn’t stop with building a fence.  They also provide a snug and secure dog house, and, if it’s never been done – a free spay or neuter.  And, if the newly freed dogs find a way to escape from their fence, Fences for Fido will come back and fix the problem.  The only thing they require in return is that the owner signs an agreement that the dog will never be chained again.  As Michelle, my contact in the organization said, “we’re about removing barriers so people can give their dogs the best life possible”. 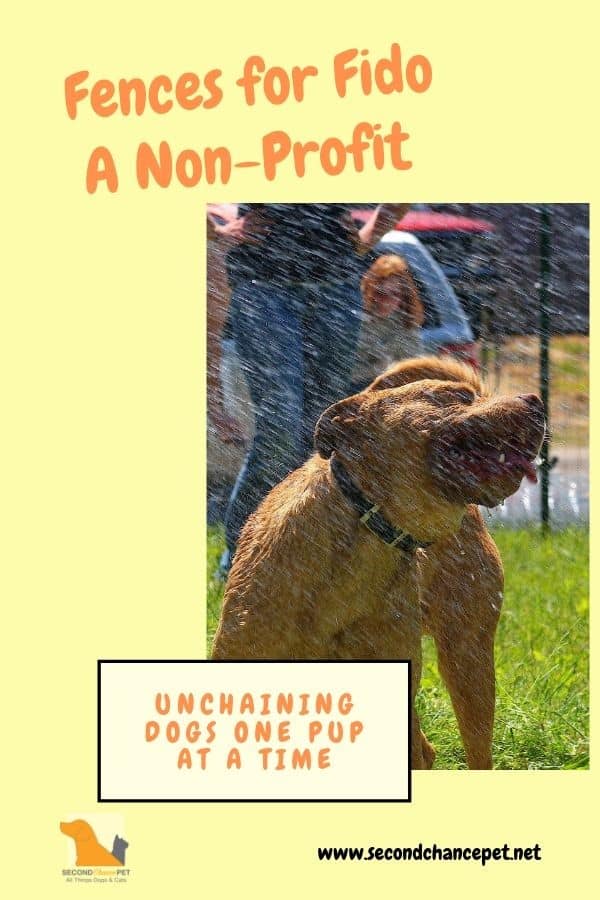 IS THERE A “FENCES FOR FIDO” NEAR ME?

Fences for Fido serves Oregon and Southwest Washington State.  They have no plans to expand, but have assistance in place for those who would like to use the idea in other locations.  Their program, Unchained Planet, provides construction plans, supplies lists, paperwork, etc. to any group wanting to follow in their footsteps.  They also run a Facebook group so that local organizations can ask questions and share ideas.

So, it IS possible to take this wonderful idea nationwide – all that’s needed is a core group of people who are willing to step up, without passing judgement, and help liberate the chained dogs in their area.  If this interests anyone reading this post, please go to www.fencesforfido.org to explore the options.

Will you be the one to help chained dogs, and their owners in your area, live happier, healthier lives?

To Michelle Blake and Patti Loverink of Fences for Fido for patiently answering all my questions.  To Nick Esposti, the unofficial volunteer photographer for Fences for Fido, for the great photos throughout this post.

And, especially, to all the volunteers for Fences for Fido – I’ll never meet you, but I appreciate all you do to give these dogs a happier, healthier life. 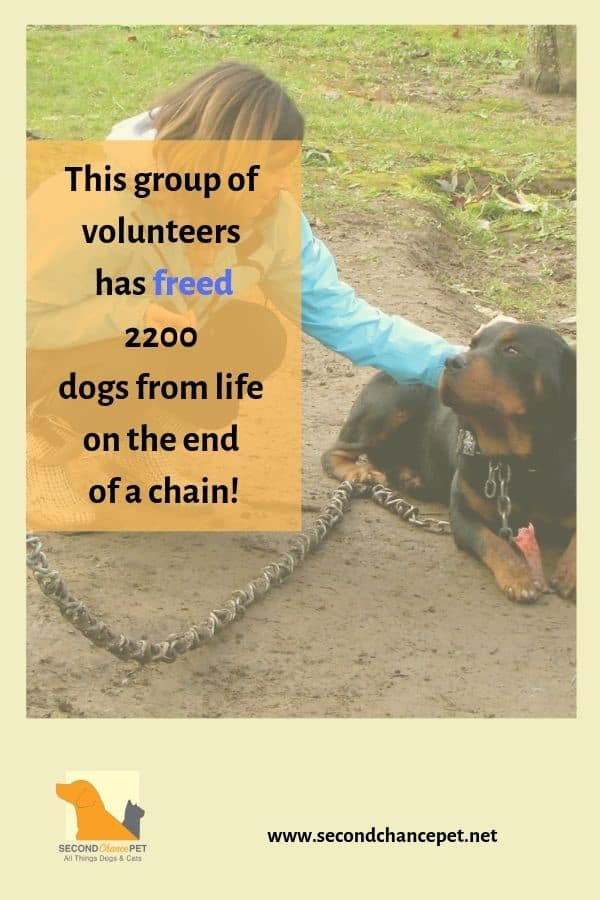 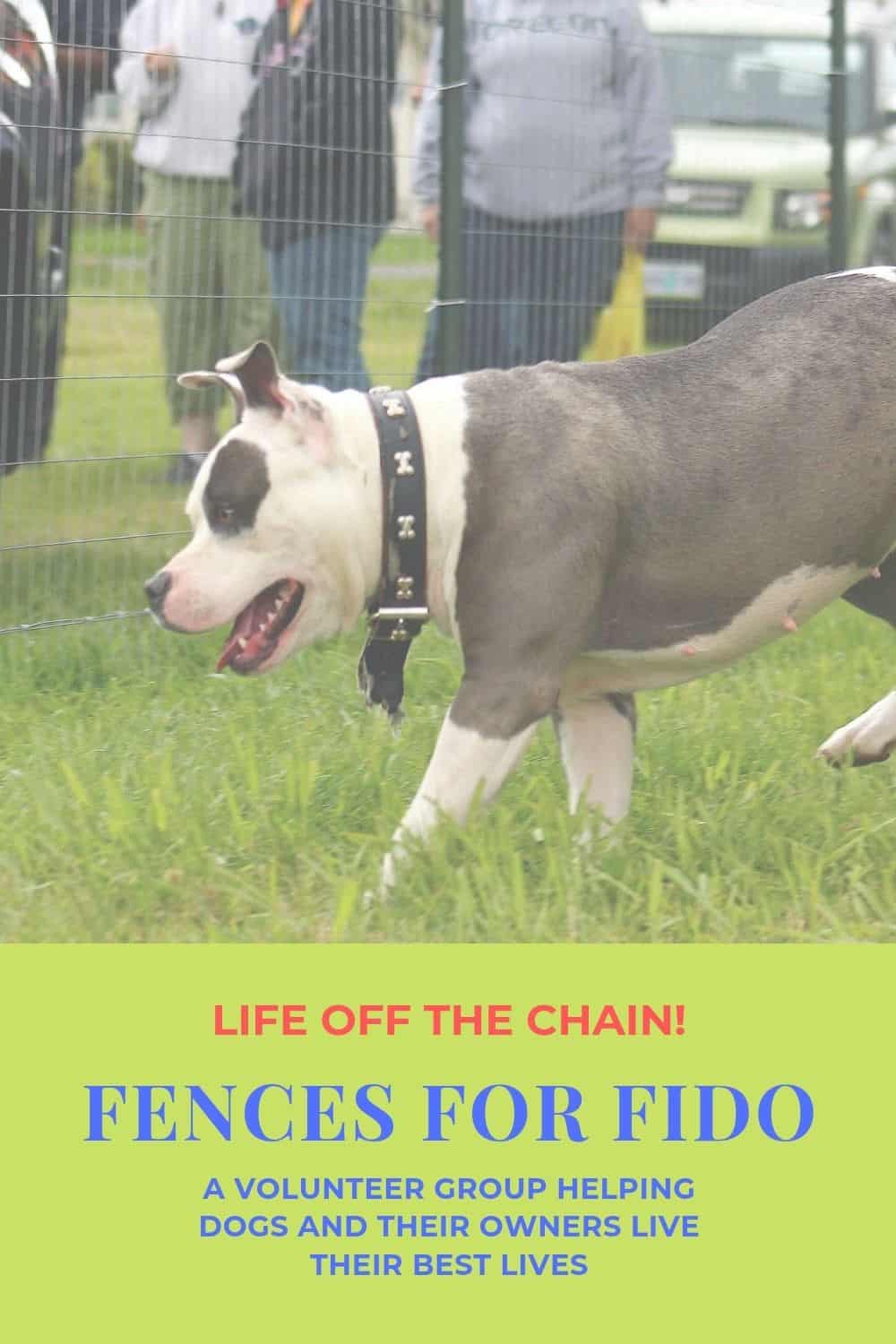 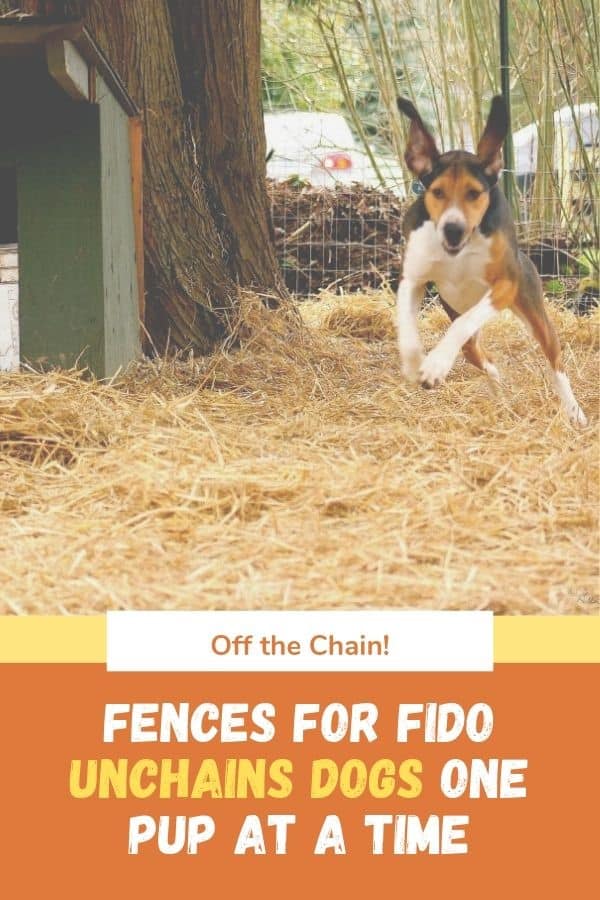